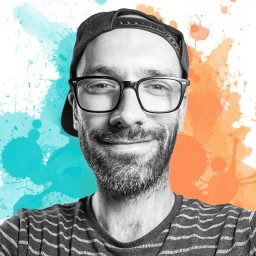 Just once in my life I've felt the addictive hooks of a social media app instantly. As in within an hour of using it.

And guess what? That 'once', it happened just ten days ago.

To give you some context, my name is Tim J. I'm a video content creator and a 35 year old father of two. I'm pleased to tell you that I don't currently spend excess time on a smartphone, because I don't own one. And I don't have any addictions to a social media app because I quit cold turkey over ten years ago.

However, I recently found out that I'm not as strong as I thought I was. And like everyone else I'm just as susceptible to a powerful algorithm.

In this post I'm going to share some ideas on social media, sharing messages, and how humor could help save our polarized world.

How My TikTok Video Came About and Why it Matters

At the end of November - of this year - I noticed a large scale TikTok poster campaign had gone up all around Vancouver. On the posters read the message 'it starts on TikTok'. Everywhere I went I could see the colorful posters that highlighted a cool action. The posters were captivating to say the least.

I studied the posters in order to develop an idea of how to turn them into a public message. I remembered that years ago the Neistat Brothers made a video where Casey ran around NYC stenciling a message on Apple iPod posters.

I figured that a similar action was needed in order to truly change the TikTok posters core message. The Neistat Brothers adequately titled that video a 'public service announcement', so I decided to do the same thing with my video.

This was an important project for three reasons:

When I was researching TikTok for this article I spent a handful of hours on the app watching videos. In that short amount of time I experienced an 'addiction ripple effect'. By that I mean, for the next 7 days after using the app, I had urges to check the app every single day. And that's coming from a digital minimalist who prides themself with having no social media addiction

Here are a few things that I discovered about TikTok:

"TikTok isn’t about you or what you’re doing. It’s about entertaining your audience... TikTok is about remixing culture"

My take away from diving into the TikTok app is this: it's not just another social media, it's different, and it had its claws in me within hours.

Feedback loops aren't new. Getting feedback on your work or ideas is a natural part of the human experience. What has changed in the last 20 years is how AI controls our feedback loops with instant responses and messaging. Making sharing ideas or having a civil discussion harder to do, because of the natural polarization of an algorithm.

I won't get into how quickly a thread can be hijacked on FB or reddit. By now I'm sure you've experienced it. Often times conversations are ruined by trolls, agitators, and jerks who viciously rip threads into bits, like sharks in a feeding frenzy.

My solution to the 'hard to share serious ideas' problem is humor. Let me try to explain.

When I first watched the Neistat Brothers poster-campaign-video that's exactly what it was. It was unexpected and genuinely funny.

And through the process of creating my TikTok video I've come up with the theory that humor is something that can unite people who are polarized against each other IF...

If the humor is done in a clever way that evokes an Ah-ha! moment instead of offending or embarrassing someone from the opposite side of the cultural belief.

Granted, my TikTok video isn't perfect. But it's also not a terrible first attempt.

Two days after I made the TikTok video I walked passed one of the poster walls to discover that the posters were still up, but my stenciled spray paint had been completely removed. Like it had never been there in the first place. I felt like I was playing a video game where the level had just been reset.

I dished out a joke and then TikTok dished one right back at me. And that's the way good humor should work. It shouldn't leave either party in despair.

As things progress I want to make ikario content that includes genuine humor. Because, it's a way to connect to people who don't see things the way that I see them. And that's good for everyone. Diversity of opinions is a good thing.

And the theory that I'm going to continue to explore is that humor is an important tool, it's like a type of social medicine. And if used properly it can help highlight some of the flaws in our society that need to be addressed.

When was the last time you were impacted by something humorous to the point of laughing out loud? Have you ever embraced a new perspective because of something hilarious? Let me know in the comments below and I'll be happy to jump into the discussion.

Tim J is a video content creator. He's passionate about simplicity, and often times complicates things? His pregnant wife and three year old daughter keep him on his toes. And when he get's a night out with the guys he's happy to join in on an adventure of any shape or size.